On December 2, 2021, the Unreal Open Day was held in Shanghai. Hero Games CEO Daniel attended and delivered a speech on "The Development of the Game Industry from the Perspective of Business Theory", which comprehensively shared his thoughts on the "Industrialization" and "Scale effect" of the game industry. He also brought Hero Games’ independent R&D game, as well as their first space exploration sandbox game "Project Stars". 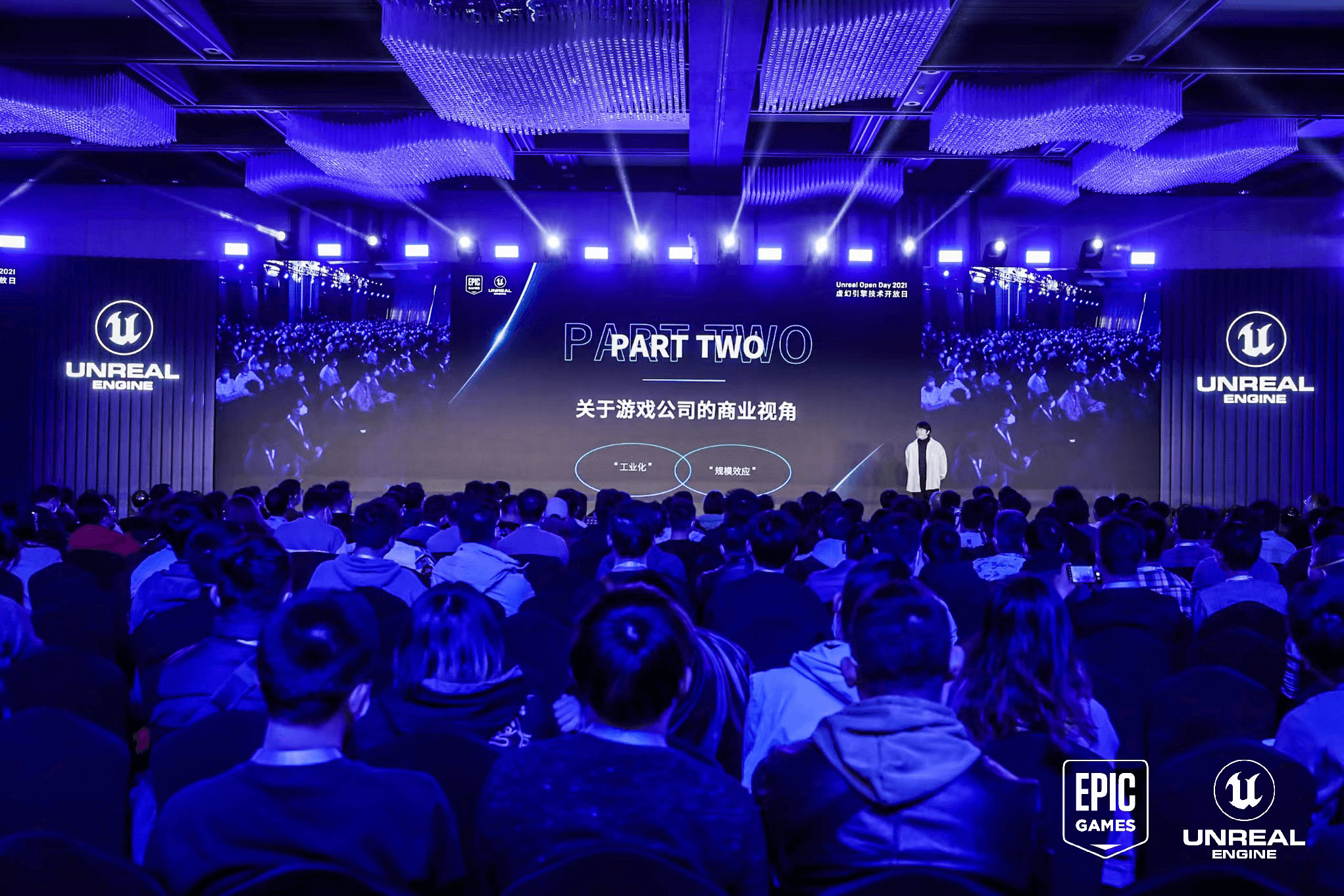 At the beginning of the speech, Daniel first gave a brief introduction to the Hero Games, which focuses on their high input into quality games. Their products cover independent R&D game series, including "Project Stars", "Utopia: Origin", "Last Island of Survival", etc., and invested/co-produced game series, including "Black Myth: Wukong" and "Punishing: Gray Raven", etc.

1) What products need to be industrialized?

2) Why does this characteristic of the product need to be solved by industrialization?

3) How does industrialization solve these problems? 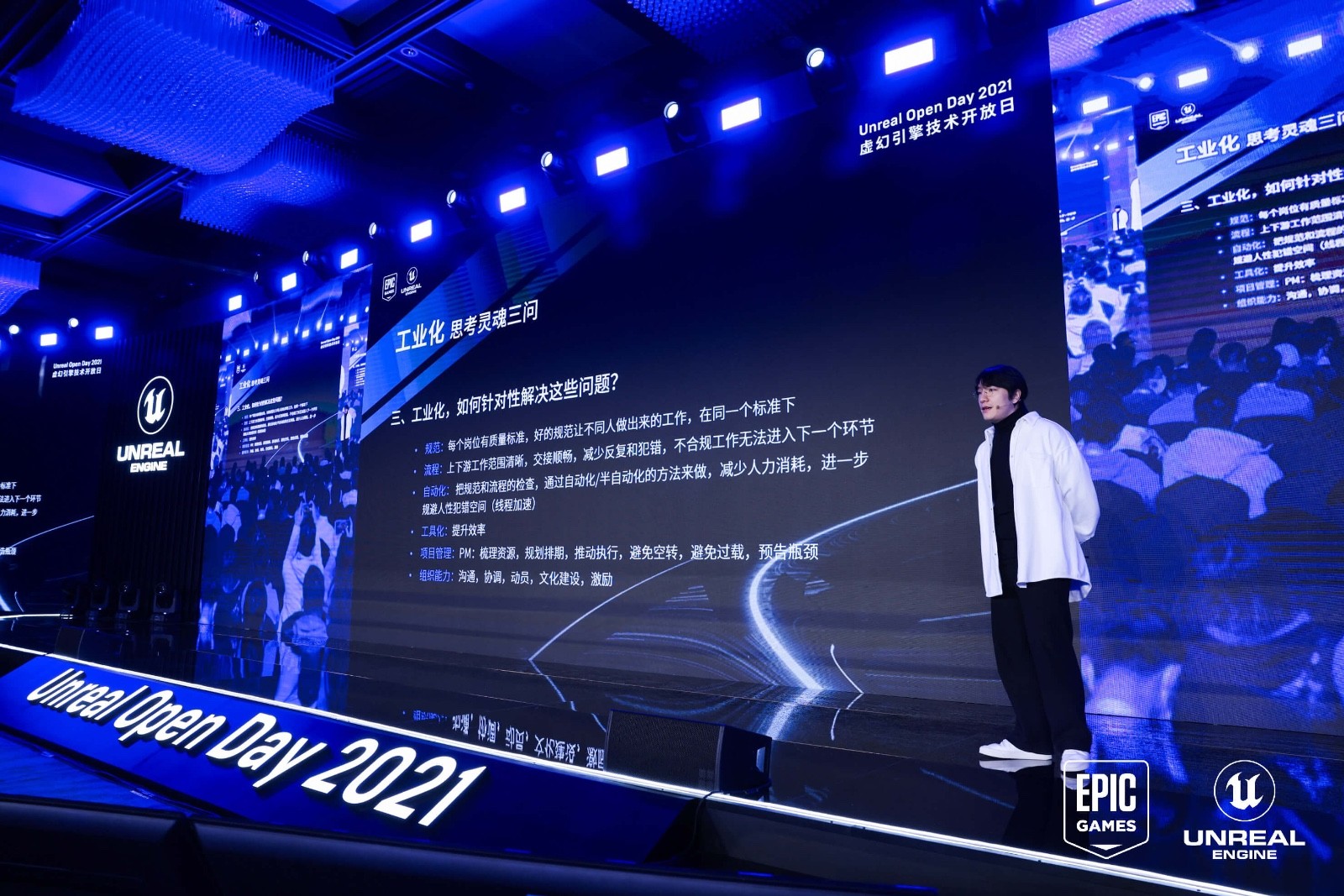 After thinking about the previous three questions clearly, Daniel believed that industrialization would inevitably bring an internal team upsizing, which presented itself as a scale effect. In the past, when making mobile games, a small team of 20-30 people was enough for it. Nowadays, it started from usually 100 people, and sometimes it reached 400-500 people for one project. In the future, the team size of a project would probably become larger.

1) What is the scale effect?

2) What is the impact of the scale effect?

3) What does this effect bring to the practitioners of the game industry?

What does this effect bring to the practitioners of the game industry? Daniel contended that industrialization is a brand-new practice to guarantee quality and efficiency when managing a large team. Large teams would bring negative scale effects, with high capital investment and tough management. If the market was not large enough, the market’s positive scale effect could not prevail against the negative scale effect that a team brought about. In the long term, the product would have no advantage in terms of resource investment.

The following is the transcript of the speech：

Thanks to Epic Games for your invitation,

First, I’m going to briefly introduce Hero Games. Hero Games focuses on high-quality game content. As the host just introduced, we have made a lot of investments in the game industry. We are also the co-producers of these games. Many people knew Hero Games because of Black Myth: Wukong and Punishing: Gray Raven.

I was major in finance and economics, so I want to share with you my opinion of the game industry from a business perspective. The topics today are industrialization and scale effect, which are two classic concepts in business theory, which were put forward in the 19th century.

Why industrialization? In recent years, a word called industrialization was widely spread in the game industry. There has been a lot of discussion inside Hero Games. What products need to be industrialized? The more demand for quality, the wider dimension of production and design, and the larger capacity of content, all lead to the increasing importance of industrialization. Why do such products need to be solved by industrialization? High quality requires experience and technology and particularly requires experts in niches. Multi-dimension means high demand for quality and high complexity, which calls for experts in different areas. The large capacity of content indicates more producers, more worker threads, higher difficulty in coordination and management, as well as reduced per capita efficiency, longer production period, more changes, more uncontrollability, lower predictability, and higher cost of adjustment. If you participated in the game production, you would understand these difficulties.

Why can industrialization solve these problems? There are the six factors we discussed:

1. Standards. Each position has standards, and good regulations allow different people to do work under the same standards.

2. SOP. The scope of work is clear, the handover is smooth, and repetition and mistakes will accordingly be reduced. Unqualified work will not be allowed to enter the next stage.

4. There still needs a lot of tools here.

Next comes the topic I particularly want to talk about today: the inevitable result of industrialization is the scale effect on teams. Industrialization may not make more money for products, instead, it brings more labor costs to the team. For example, in the past, a small team of 20-30 people could make games, but now we usually make a game with a 100-people team or a team with more than 400 to 500 people.

So, I want to talk about the scale effect today. I’m going to ask three questions:

1. What is the scale effect?

2. What is the impact of the scale effect?

3. What impact does the scale effect have on game practitioners?

What is the scale effect?

Adam Smith, the godfather of economics in the 19th century, first put forward scale effect in “An Inquiry into the Nature and Causes of the Wealth”, but his theory is hard to be applied in the game and Internet industries today. Here is the best definition I have heard about the scale effect: when the volume of sales and customers are large enough, the advantages come to exist, which are: 1. advantages of user experience. 2. cost advantage. Whether it presents itself as a cost advantage or user experience advantage depends on the specific business model and the game model.

2. Linear growth: Taobao is a great example. Taobao gains more value by adding an extra user, but there is no connection between users. Therefore, the scale of Taobao increases linearly. This explains many problems: For example, Taobao started in 2003, JD developed rapidly in 2010, and now it is PDD’s turn. However, WeChat never has an opponent. Taobao has always had new opponents because the net effect is not that strong.

3. logarithmic growth: As the scale rises, the growth will slow down after the scale reaches a certain level. Its slowdown comes from the downgrade of experience. Here are a few examples. This usually happens in bilateral networks. Taxi and Taobao are relatively typical bilateral networks, but not all bilateral networks have negative competition. For example, the supply of every additional person on Taobao will not change, so Taobao's bilateral effect will not slow down its growth. But for example, if you take a taxi, the buddy next to you comes out later than you but he grabs a taxi faster than you. You will be unhappy, and you will turn off Didi and change it to Yongche. This is a side effect of bilateral networks after it has developed to a certain scale.

So, what do these growth curves mean in the game industry?

For example, the typical MOBA game AOV is exponential growth, while the content-oriented game Punishing: Gray Raven is linear growth.

So, the question is, do MMO or SLG games belong to logarithmic growth? Think about it.

For example, we compare AOV with We MOBA. We MOBA was launched earlier than AOV and obtained nearly 10 million DAU at a faster speed. We MOBA invited BigBang for endorsement, which was quite awesome. Why did AOV prevail after it was launched? It is because of the net effect. AOV is free to play, but We MOBA had many problems with the design. Users spent money to become stronger and abuse newcomers. The user experience was quite poor, so the network effect was poor as well. When AOV was launched, its slogan was "fair competition", which fundamentally made its model and growth scale effect surpass We MOBA. This scale effect eventually brought a lot of experience advantages. The more users it had, the shorter the matching time would be. The more users it had, the better the mechanism operated.

The Scope of scale effect:

To what extent does the scale effect work?

Corresponding to the game industry.

4. Cellular type: the board game.

Why I’m talking about this? In my opinion, industrialization requires a large-scale team to make more industrialized products, and industrialization is a brand-new practice to guarantee quality and efficiency when managing a large team. However, a large team scale will bring a side effect, and the scale effect will also be reflected in management. Assuming that there are more team members, the efficiency will inevitably be reduced and the cost will become higher. If your product itself is not suitable for scale upsizing, it will be very hazardous. Why mention this? Because we are all practitioners in the game industry, you can check if your project has such potential risks.

On the other hand, traditional super-large-scale game companies have no such scale effect. For example,

1. the traditional 3A manufacturers have been industrialized very early. But the model has a little anti-scale effect, which is a pity.

2. For traditional 3A manufacturers, if there are popular models, product scale upsizing makes money, but they need to be careful when encountering sub-level products. However, large overseas 3A manufacturers are generally moving to GAAS. This is the most likely competitor for Chinese games in the future.

Another small idea is that the product itself has a scale effect, for example, PUBG can cover most people’s demand for FPS mode. QQ Speed had higher user demand and higher DAU compared with QQ Dance, and it could include a lot of gameplay modes of QQ Dance. Another example would be the Auto Battler. The only product that eventually survived is the Auto Battler in League of Legends. These are some typical cases of scale effects.

Finally, why Hero Games are determined to choose Unreal? Because we have been using Unreal for many years, we started using it very early. After Unreal had completed Fortnite, they invested a lot in many small companies. Theoretically, this engine will continuously upgrade in the future to help developers make higher-quality content more efficiently. Assuming that it develops at today’s pace, its scale effect will be considerable. We firmly choose Unreal because we believe time will prove and we will make better games with Unreal.

This is the goal of Hero Games: to make a super-quality game with a strong scale effect and industrial R&D.